As we look forward to 2020 we also look back at the year that we are saying goodbye to. 2019 was a year full of highs and lows for me. On the one hand I was getting to fulfill a lifelong dream to direct my own project but on the other hand it was one of the most challenging experiences I’ve faced. Every project has its own challenges but a short film is unique. Everyone on the project has to wear many hats because even though the development process is pretty much the same as a longer form project the team is smaller and the budget tighter. 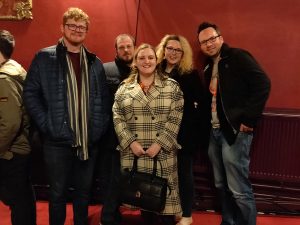 Just some of the team who came to support Jam at the Premiere in Cork.

There were times when I worked long into the night because we were short handed and there was no one else to do the job. I was weary and wondered if I would ever be able to reach the end and have something we could be proud of. I questioned my decisions and my abilities. Those were dark moments.. but then some beautiful work would turn up in my inbox from an artist who was probably doing the same thing in their own house. It revitalised my energy and restored my will to keep going. There aren’t enough words for me to thank every wonderful person who helped make this film.

At the end of 2009 I came home from a 2 year backpacking trip with the idea for A Cat called Jam. In 2019 the film that came to me on a Fijian Island 10 years earlier became a reality and had its very first screening at the Cork International Film Festival in the Screen Ireland World Premieres Screening.

We even got our first review and I am so grateful for the positive reception. Film Ireland really gave me the best Christmas present with this review.

“Lorraine Lordan’s A Cat Called Jam opened the programme with the humorous tale of a cat who sees himself as a dog and just wants to be part of the pack. Despite reactions suggesting he doesn’t quite fit in, Jam is persistent in his mission, lightheartedly singing about meat and chasing his tale like the other dogs. A beautifully drawn and well-crafted animation, this short has an uplifting message about finding the place you belong for yourself and being who you want to be. This message carried across several of the other films, with A Cat Called Jam offering an excellent start to the group.”

So as I say Goodbye to the last decade and look forward to new projects and horizons in 2020 and Jam’s tentatively steps out into the Festival circuit. I just want to say to anyone who is in the middle of their journey to keep putting one foot in front of the other. It’s totally worth it! ;D
Lorraine Lordan
Director A Cat called Jam 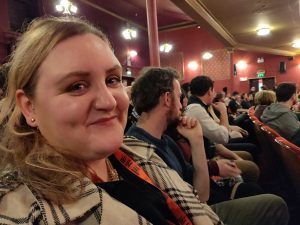 A nervous director waiting impatiently for the screening to start.

Finally, enter the mind of a child, a son, a grandson, & even a cat as you’re transported to the confinements of a jail cell or to the boundless world of an extraterrestrial club. Your imagination will bloom and expand in the electric and eclectic styles of our ANIMATED SHORTS.

Check out this #Moho webinar with the director of the #PuffinRockFilm https://twitter.com/MohoAnimation/status/1413156629135216644

Join us next Wednesday, July 14 at 11am PDT(California Time) for a FREE 1-hour webinar on Puffin Rock - Upgrading Oona | Adding Vitruvian Bones to an Existing Rig with Jeremy Purcell @cartoonsaloon #mohoanimation Register here: